Roadblock is one of my all time favourites, on the spot, I’d probably say that he’s my favourite G.I. Joe. Maybe that colours my view on the 1986 version, in a more negative light, but let’s face facts, the figure sucks. 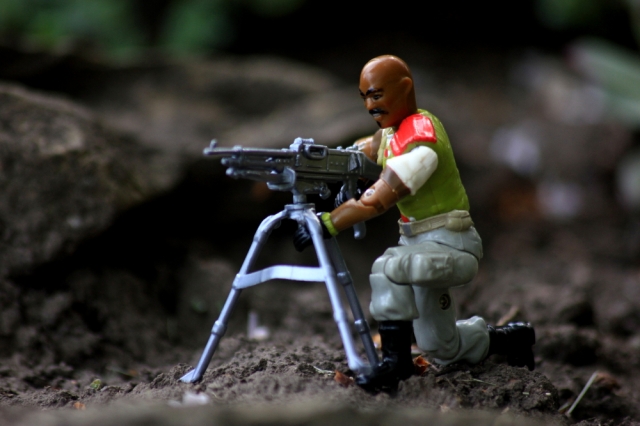 As G.I. Joe went along, there were some changes in the way that Hasbro’s approach to sculpting and design would be. In 1986, there was a bend towards making some figures seem to be leaning in a more cartoony style. Where this was most noticeable, is with the figures heads. They became larger (Or at least seemed to be larger), with more expressive facial sculpts. However it’s not the grins, you’d see from Duke or Flint, but rather toothy mouths, bulbous noses, or other sort of outlandish appearances.

Roadblock, got saddled with a big grin, and eyes that look like he’s squinting. It’s not the best look, and the sculpt itself leaves a lot to be desired, as it’s animated, but due to the facial expression, winds up looking strange, because the face turns into a triangle that comes to a downward point at his chin.

The outfit they saddled Roadblock with, isn’t the greatest, but it’s something that ties in with a few other 86 figures from a design perspective. The figure that he shares the most with is Cross Country, but a couple other ’86 figures share some of these design cues. If you were to give Low Light a green torso, his design would wind up matching up with Roadblock and Cross Country very well.

There’s some detailing on the ’86 Roadblock, but not all of it is well done. He’s got a knife strapped to his nice green vest he bought at Macy’s, but it doesn’t look very good. It’s a really soft sculpt, unlike the sharp sculpting you’d see in earlier years. The torso in total has a lot of really soft looking details on it, and even though there’s a lot of paint apps on the torso, they don’t help too much. The red and white make it look awfully busy, and there’s an unpainted strap from his web gear on the figure’s back.

The legs fare a lot better, as they have stronger detailing, and there isn’t as much to them. They’ve got some wrinkles and some pockets, so they’re not visually distracting, like the torso. Sure they grey is pretty drab, but there’s some Guile figures out there with jungle or desert camo that can break the monotony up, if you’re so inclined. The waist however, is kinda weird, as it doesn’t seem to ever line up with whatever set of legs it’s paired up with. Oh well, it was only used far too many times! 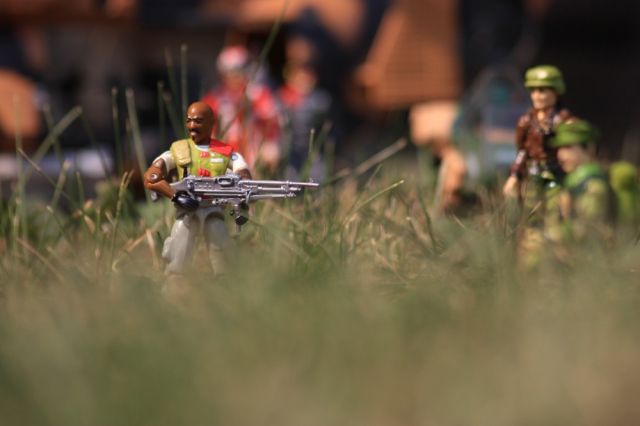 The colouring on Roadblock is very vibrant. 1986 was a year where Hasbro really experimented with the line, and one of the places they did that was in the colouring. It’s a lot brighter on a whole, than other years, and it’s not just through highlights or the occasional bright figure like Sci-Fi, but rather EVERY colour used is shade or two lighter than what colour it would’ve been the year before. The green on the vest is used throughout 1986’s figures, and it’s what would be the Footloose or Flint shade of green in 1985. Lift Ticket and Beach Head‘s green would probably coincide with the one used by Mutt in 1984. It’s a weird thing Hasbro did to differentiate the year, and they would go to this well every once in a while, like in 1989 or 1992.

One place I’ll praise this Roadblock, is how meaty they made his arms. For a character that was portrayed as a giant, his 84 arms are kinda small. He’s got some pretty big biceps now, which is good to see. Roadblock must’ve started doing preacher curls everyday, and nothing but preacher curls, sometime in 1985.

As a character, Roadblock is pretty great. It’s undisputed, and this design wound up seeing a lot of action throughout the G.I. Joe media spectrum, as Roadblock didn’t receive a new design for 6 years, but was a constant in the comic. Another place where this Roadblock winds up being a famous design, is the fact he was very prominent in the G.I. Joe movie, sharing a big scene with Cobra Commander who was turning into a Snake. Since the design is somewhat important, the figure might be worthy of being kit bashed with something like a 1992 Roadblock head.

A while back on Twitter, I posted a picture of the 86 Roadblock with the description of him being one of the worst G.I. Joe figures. It received way more blowback than I’d ever expected, since I was pretty certain nobody liked ’86 Roadblock. However it led to this excellent take on a meme by my friend Sintechness, I think some of that was due to the fact this design was very famously used in many G.I. Joe media portrayals, which is a thing that makes weaker figures, kings.

At the end of the day, this figure isn’t very good. His head is weird, his torso is pretty poorly done in the detail department, and well, he’s definitely not worthy of the Roadblock name. The 1997 Rock ‘N Roll shows that some colouring improvements help, but in the end don’t help that much, as a bad mold is a bad mold. 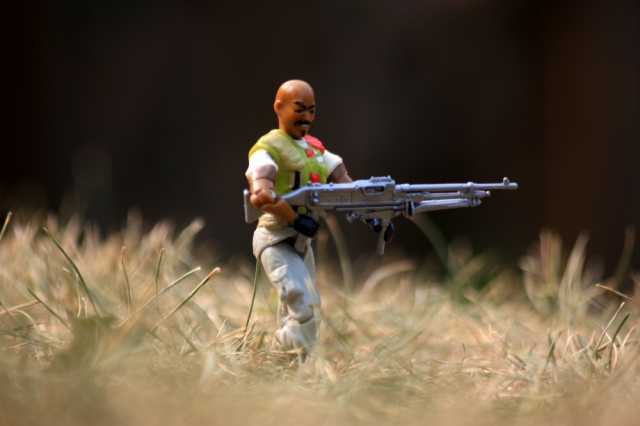 This entry was posted in Reviews and tagged 1986, G.I. Joe, Roadblock. Bookmark the permalink.