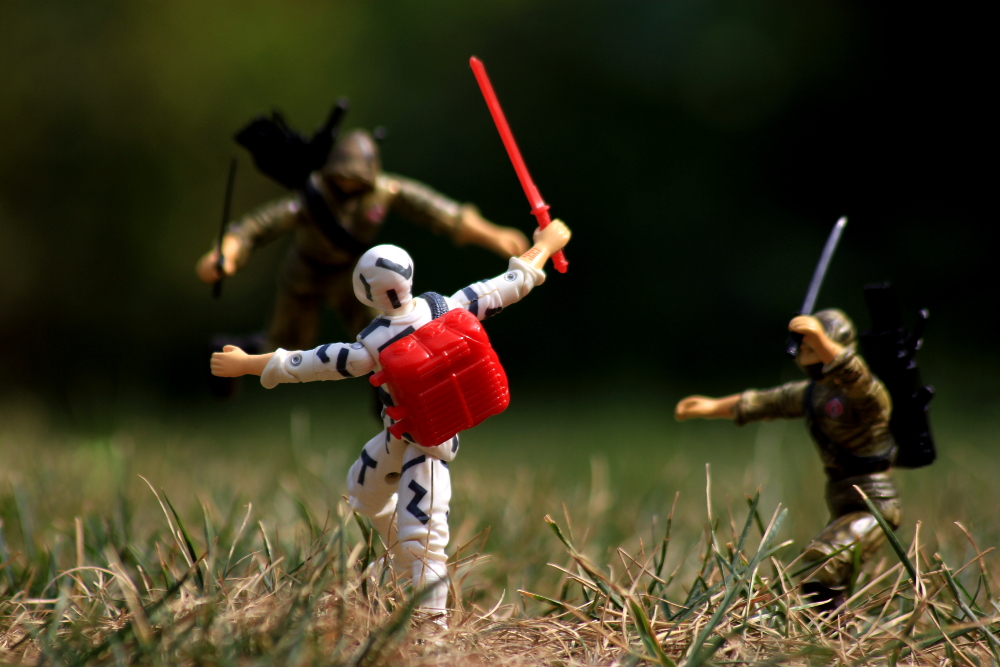 Storm Shadow as a good guy is something that the fan base is quite divided on, it’s one of those things that both arguments pro and con for him being a Joe have merit. A while back in a comment, the Amazing A-Man summed it up fairly well;

There’s this weird thing were some fans just wanted a status quo maintained. They want Cobra’s leads plotting against each other but never want Cobra Commander deposed or killed. They want Storm Shadow’s backstory but don’t want him to stop being a Cobra.

I’ll readily admit that I prefer Storm Shadow as a COBRA, not even to maintain the status quo, but rather, I feel having two superpowered ninja warriors on the G.I. Joe team, is overkill and tilts the playing field to a ridiculous degree, because at this point what’s COBRA got? Though, if I was to be forced into choosing anything, I’d probably just stick with Storm Shadow staying dead, after The Baroness shot him.

Luckily this isn’t an article based on me arguing with myself over thirty five year old Comic Book plots, as I wanted to look at the 1988 Storm Shadow, because it’s a very high quality mold. I’ve looked at very early on in the history of this blog, where I was more discussing the issues of TRU 6 packs.

Storm Shadow was a figure that was available non-stop from 1984 through 1987. When it was time to finally discontinue the very popular ninja, Hasbro didn’t leave Storm Shadow as a character off the shelves. The 1988 Storm Shadow was an understandable progression on the 1984 design, which featured some similarities, but wasn’t a direct rehash. It’s an interesting way of redesigning the character, as the first three characters (Hawk, Roadblock and Snake Eyes) that got brand new molds for their 2nd version, all featured massive design alterations, that were somewhat unrecognizable from their original figures. 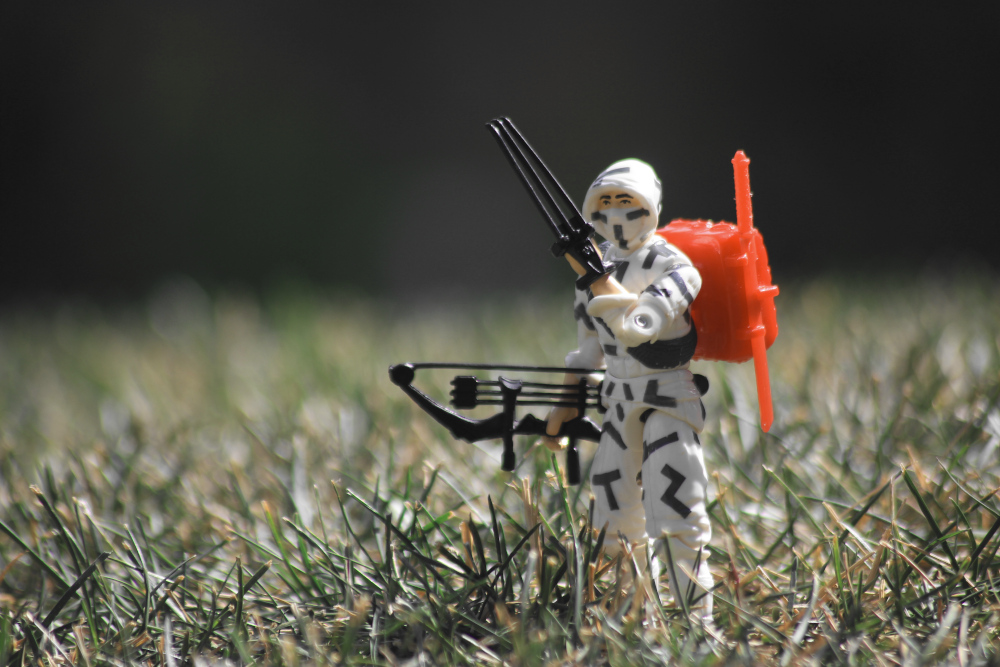 Storm Shadow is still in baggy ninja togs, but now he’s got long sleeves, and the traditional ninja mask is now cloaked with a hood. The new design for the head is very nice, as it’s different from the original, but still has the ninja appearance. The boots on the figure are another change, because rather than having wraps around his ankles, he’s got something that looks a little more protective strapped to his shins. Which would make sense for a ninja.

The figure isn’t bogged down with the belts and throwing implements of death that the 1984 had, as he’s now got a bundle of rope and a belt of pouches around his waist. He was 90s extreme before that was fashionable, I guess. It’s different, than the original, but the overall appearance is still similar, which fits the overall motif of this update. He’s not just Storm Shadow in name.

The biggest change overall to Storm Shadow, is that he is now in camouflage. It’s a nice way to change from the pure white that the original was, while still maintaining that as the base colour. I think it looks pretty sharp, and I think works well with some of the other digital camo figures of his time, like Repeater, Shockwave and Recoil. It’s one of those things that establishes his allegiance, without pasting a big G.I. Joe logo all over him. The thing about this Storm Shadow that doesn’t get enough credit, is just how well he was integrated design wise, with the fairly under-developed 1988 G.I. Joe team.

The colouring on Storm Shadow ties in quite well with Hardball and Blizzard, which also ties him in with Charbroil and Budo. His aforementioned camouflage ties him into Shockwave and Repeater, and the absolute contrast with Spearhead, Hit and Run, Muskrat and Lightfoot makes the figures look nice together. Storm Shadow is the only single carded figure that works with every other single carded figure, an impressive feat. I assume this was intentional, because Storm Shadow is obviously the most recognizable G.I. Joe released that year, and one of the better figures overall, so tying him into the rest of the new figures was probably of paramount importance. 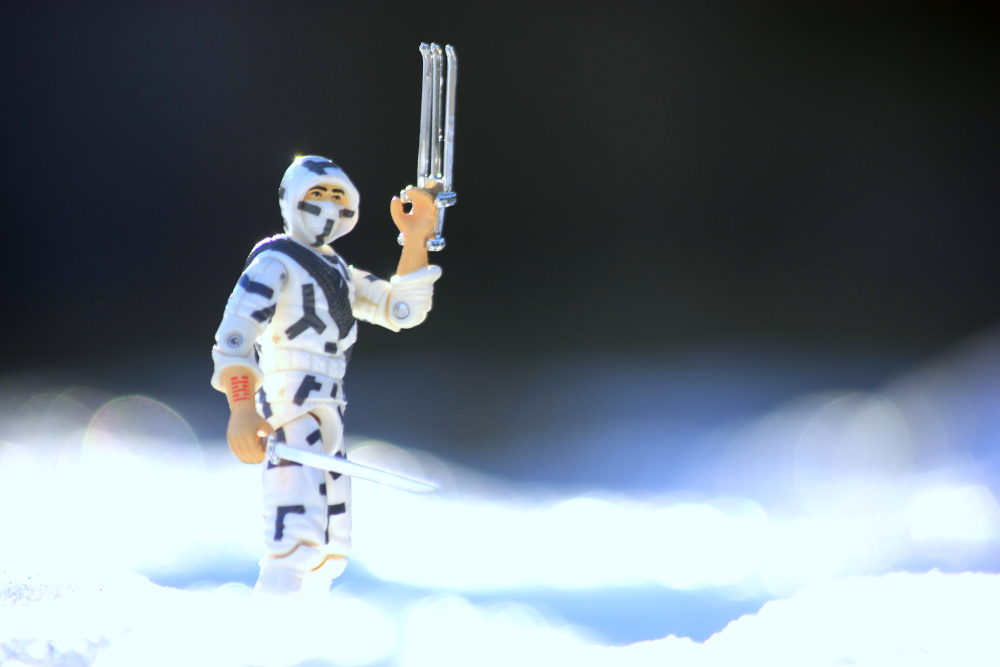 The 1988 Storm Shadow had to follow suit of the original Stormy, by including good accessories. He’s got a compound bow, that’s probably better scaled than the ’84 version, and a really cool claw that looks like it means business. His sword is a giant disappointment, not because it’s poorly done or anything, as it’s quite a nice sculpt, it’s just that it’s red. Really red. His backpack is also very red, but it can hold the sword on it’s side, so it’s cool. The detailing on the backpack is quite neat too, as it’s got some throwing stars, Stormy’s missing pair of nunchucks, and what I’ve always assumed was a rope ladder. It looks cool, but is killed by the colouring.

The bow and claw were seen later on in the Ninja Force, but the sword and backpack were only issued the once. It’s quite disappointing that Hasbro would consistently re-issue many weak weapons, but then skip over some really good ones. With the advent of factory customs there’s been some decent things to use in place of the original accessories. The 1984 Storm Shadow accessories are a good replacement, and The Black Major did the 1985 Quick Kick sword in a couple new colours, and that might be the best overall sword in the line.

I don’t have much of an idea as to how Storm Shadow as a G.I. Joe works. I’m not really a fan of them having outright ninjas on the team, and I kind of view Storm Shadow through the Action Force characterization, which is more rotten and ninja like. Though I do think the line in his filecard where he will occasionally do a special mission if Snake Eyes asks him nicely, would probably be the best way to use Storm Shadow in the G.I. Joe capacity. I could see the story where Storm Shadow finally figures out who killed the Hard Master happening, but rather than him becoming a full fledged G.I. Joe, he’s a guy who’ll come along if it’s to take on Zartan or something.

Though, even with the misgivings about Storm Shadow as a G.I. Joe, this is still a really good figure, that has pretty good gear. There’s nothing forcing anyone to use this figure as a Joe, either. That’s a nice thing about this figure, is he’s got no markings, and an even nicer thing about G.I. Joe, in that you can use your imagination with it, and do whatever you want to do. I personally don’t do much with the figure except use him in spotlight photographs, or the occasional ninja battle to the death. 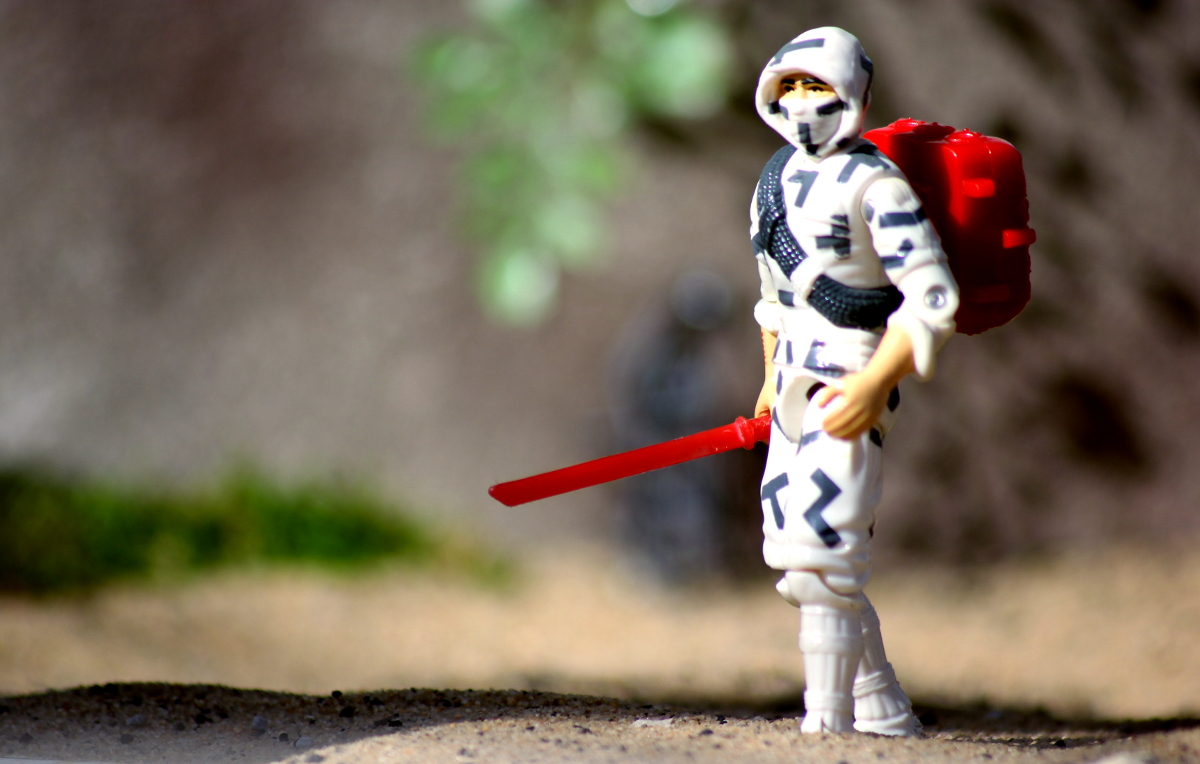 This entry was posted in Reviews and tagged 1988, Cobra, G.I. Joe, Storm Shadow. Bookmark the permalink.