When Red Laser did his second big set, there was a group of figures that happened to be somewhat based off of characters from the New-Sculpt Era. A couple were actually fairly close to the source material figure, another was more based on a 1997 prototype, and a third, today’s figure, is a reimagining of what was a fairly lazy Beach Head repaint that came with some horrible looking “Assault Truck”. The vast majority of new vehicles from the 2000s are absolutely terrible looking toys, that I couldn’t imagine liking as a child, let alone purchasing as an adult.

The figure is a Swivel Arm Grunt repaint, with a nice grey torso and green pants. The green pants were ones that caused me to pick up some extras as they helped me do some customs. The grey torso is pretty nice too, and it’s a shame the short sleeve arms don’t fit on this torso, because a grey Breaker was a custom I thought about. I know a lot of people think the 1982 parts have been used a little too much, and I can see that, but at the same time they’re generic enough designs, that as long as they’re being used creatively to make “New” renditions of figures, I’m fine with them. I can handle a few more Grunt torsos, because I’d rather that then a dozen different figures with Roadblock’s torso or whatever. This figure works as a somewhat decent homage to the New Sculpt figure, in that the legs are green, the upper body is grey, and the skin is black. That’s where the similarities end though, and personally I’m fine with that, as this figure isn’t dressed up like Beach Head, and and instead is a 1982 Breaker head as an African American. Personally I enjoy seeing race swaps on a lot of these classic heads. More diversity is always welcomed, plus it’s a change of pace, especially with the Breaker head, as the Stalker and Grunt race-swaps were originally done in Argentina and India! 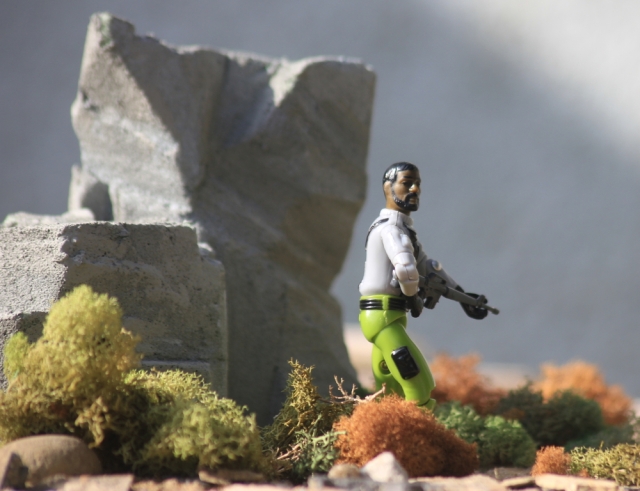 The “Rampage” character was pretty bogus, it was some dude who was close friends with Beach Head, so much so that they dressed the same. He also read comic books and did car repairs. I don’t really like the character at all, but I really like this figure, though. I feel I almost should repurpose one of those wild Nation Of Islam Bronze Bomber characters and give it to this figure.

In actuality the character that this Rampage figure will likely acquire, is more along the lines of a commando involved in the earlier fights against the Red Shadows. Since in the G.I. Joe universe I daydream about, the Red Shadows were the big terror group pre-COBRA, which found themselves in conflict with what could best be described as spiritual precursor to the G.I. Joe team.

Red Laser’s factory customs, created probably 10 or so figures that I quite like, but feel they don’t really match up with the vintage figures all that well, so my solution to this issue was to have them be the heroes in the pre-G.I. Joe vs. COBRA conflict. This would give them something to do, and take some of the edge off of having characters that were supposed to be good guys wearing a lot of what is unquestionably COBRA Blue. It also allows figures like this one, a chance, where they’re not being outclassed by a figure like Airborne, Duke or Stalker.

Unfortunately, the lack of a really good O-Ring Red Shadow (at least until The Black Major’s new one comes out) and the unlikeliness of that previewed Red Laser’s Army version of Joe Colton, ever coming to existence, kind of leaves the whole idea, as well as the usefulness of these few figures, including Rampage to be pretty much nil. However, that’s usually what happens when you get an idea before the ability to implement it happens.

Since the colours on this figure are a fairly unique combo, and combined with the race switch, it’s a more original looking figure than a lot of the RLA 2018 figures. This comes in handy, as some of those figures aren’t the most seamless integration into predominantly Hasbro figure displays. Rampage doesn’t really have that issue, since he’s not one solid colour, nor does he feature a lot of dark blue, which usually has COBRA connotations to it. So while he’s not a perfect match for vintage Joes, he still manages to fit in better than a lot of the 2018 Red Laser figures wound up being able to. 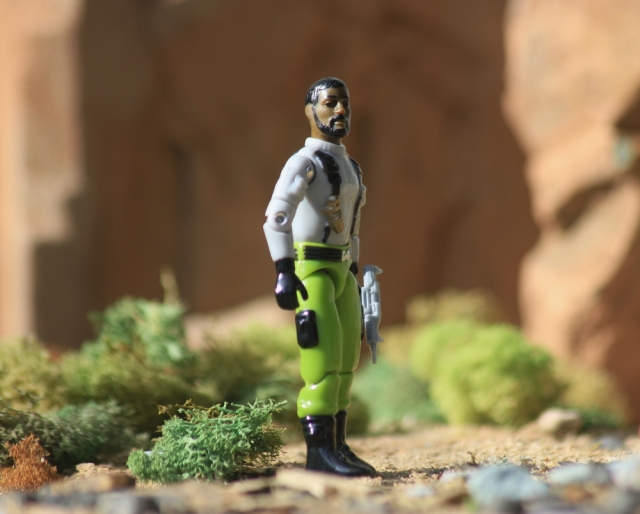 This figure succeeds in being a different addition to the line, while still maintaining very early G.I. Joe parts. In a way it reminds me of one of Evilface’s early 3 3/4 customs or if the new character mandate that was pretty common from 2000-2005 was originally started in 1997. Obviously the figure doesn’t have the seamless ability to sneak into predominantly vintage photos, he still has some charm. Of the 2018 Red Laser figures, and not including the Argentinian homages, he’s one of the few that I didn’t completely forget about once the “New Figure” feeling went away.