There was a dozen or so Storm Shadow repaints that came out at the tail end of 2019, some of them were fairly interesting, some were quite bland and there was a couple that likely would’ve been a lot better if there weren’t factory issues. The figure I liked the most of the various flavours is a basic 1984 Storm Shadow with the slight change of red highlights.

The plain white Storm Shadow is one of the finest character designs ever to grace G.I. Joe. I’m not sure why, but it just is. In 2002, Hasbro had already returned him to being a COBRA, and began adding more red into his design. So there were some interesting designs that came out in the New Sculpt Era, which were usually inhibited by articulation changes, that usually revolved around Storm Shadow being clad in white with red markings. With red becoming part of Stormy’s colour palette, it extended past the New Sculpt era and into the modern error, with the peak figure being the 30th Anniversary/Renegades Storm Shadow. An overall solid figure, that I actually bought, during my short term with the Modern Figures. The figure was a more traditional take on a Ninja costume, with removable web gear that matched either the 1984 figure, or there was a red sash/belt combo. I quite liked the sash/belt combo with the classic look head. 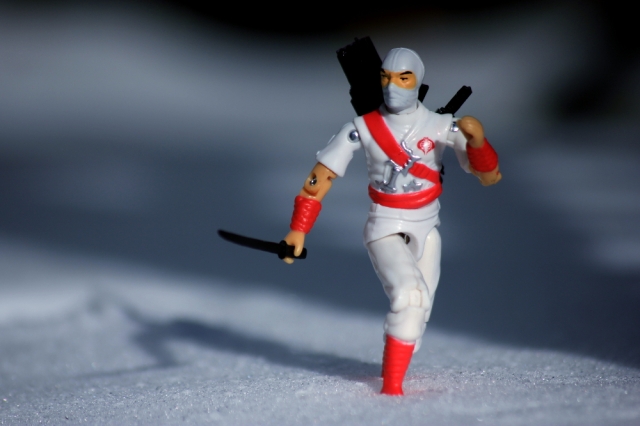 Figuring out colour schemes for the 1984 mold, which had already been done in a lot of the sought after colourings, such as Red or COBRA Blue, was probably a little more difficult this go around, as evidenced by a few of the last wave. So, going the route of post 2002 Hasbro, and taking the classic white and giving it red highlights was quite a novel approach. The basic figure is just Storm Shadow v1, but his belts are now red instead of white, and while that would’ve been a justifiable enough difference, in my eyes, the figure takes it a step farther with red wrist wraps and ninja boots. It provides a big jump in the overall colouring of the figure, but at the same time isn’t overly obnoxious colour for colour’s sake.

One place this wave is very solid in, is the fact that the silver highlights on the throwing stars, dagger and buckles are very nice. They’re sharp, have a good metallic tinge to them, and it makes for a nice separation from the rest of the earlier TBM uses of this mold.

This figure is equipped with the classic two swords, backpack, bow and nunchucks. It’s nice to see all of the v1 equipment, and though this time the figure’s weapons are done up in a red that matches the figure’s highlights. It’s actually good to see the weapons in other colours, and while red isn’t my preferred choice, they do look a little better than the tan weapons that came out with the second wave of Storm Shadows. There’s also the historical relevance of red ninja weapons, which started with the 1988 Storm Shadow. So they’re not the best, they aren’t the worst either, and having the backpack done up in red, you could probably add black or silver or whatever colour weapons you prefer to the case, and have an interesting look for Storm Shadow.

The figure also includes a Mortal Kombat Ninja head, done up to match the colour scheme of the figure. This figure has a white head with red face mask painted on it, while it’s not really my cup of tea, it’s a cool addition, and can help change some of the figures up from every one being a direct Storm Shadow v1 repaint. It was nice to get those heads in white, as it wasn’t available with the first TBM Storm Shadow based on the 1984 colouring.

The factory customs are still an interesting outlet to get vintage style G.I. Joes, but I think it’s looking like the choices of figures and colouring has been less and less ideal over the past couple of years. You don’t see armies of many of the figures, and I guess when it’s not really a figure that’s going to be army built, doing 17 iterations of the mold is the only way to get the ROI. In the latest 12 Storm Shadow repaints, there’s at least 4 variants that if they hadn’t been made, we still weren’t missing out on anything. It’s somewhat of a shame though, as when there’s a dozen repaints coming out at once it can lead to Quality Control issues, as that seems to be the case when a bunch of different figures are produced at one time, not just with Black Major, but Red Laser as well. This figure was spared, but it was kind of a bummer for the Night Force version to be hit with mis-coloured shoulder joints.

Overall, I really like the Storm Shadow mold, and I won’t complain about getting a few more usable repaints of it, and even a few of the oddities are fun enough figures to have kicking around, even if I doubt I’ll ever actually do anything with them. While getting a dozen of the figures at once was probably overkill, it’d been so long since the last batch of this mold. Plus, 2019 was a quiet year on the Factory Custom scene, if you weren’t really interested in SNAKE Armors  or molds from the mid to late 80s, so a bunch of swivel neck Ninjas was going to be highly welcomed by me.