The prevailing opinion of a figure’s quality tends to hinge on the popularity of the figure a lot more, than people are willing to admit. High quality figures can be scrutinized very severely if it’s not a popular figure or character, while at the same time, if a figure happens to be a highly popular character, there’s a good chance the shortcomings of the mold will be overlooked or excused. One such figure that due to the character’s popularity, doesn’t get worked over as much as it probably could be, is the 1986 Beach Head figure.

I recently bought a new Beach Head, which is a figure I don’t think I’ve owned in any form since probably 2003. So it was almost like getting a brand new figure, and I was surprised at how my opinion of him had lowered, since in the early 2000s, he was considered one of the peak G.I. Joe figures. I still like him and I’m glad I bought him, because the design is solid, the colours fall into the realm of realism I like about vintage G.I. Joe, but it was kind of surprising to me, how he didn’t knock my socks off the way I figured he would’ve.

From an idea perspective, Beach Head is an excellent figure, he’s got militaristic enough trappings, but is also unique enough to be his own man. The execution of this idea, however, leaves a lot to be desired. The actual 1986 Beach Head features an overly large balloon head, that’s got somewhat cartoony sculpting, and he’s wearing sweat pants. He’s a solid enough figure, but he’s also lucky to have been released in 1986, where he had media exposure and he measures up a hell of a lot better to the rest of the 1986 figures, in the realism and colouring departments. This isn’t to say Beach Head is a bad figure, it’s just that if he wasn’t as popular as he was, he’d get a little more criticism. I’d say that Beach Head is arguably in the top 3 Joe figures from 1986, and there might be one or two COBRA figures that could contend with him, which I guess is a bigger indictment of the 1986 line, than anything else.

There’s definitely a design flaw with Beach Head, though. He’s perhaps the most common figure with a busted crotch, I’ve come across. It’s such a common ailment, that if the figure has an intact pelvis, there’s going to be a premium on the figure. It’s like the 1986 equivalent of Zap’s thumbs. I think this is one of the things that sours me slightly on the Beach Head figure, as it’s a known issue, and it’s an issue that makes even junker Beach Heads more expensive than they should be, or useless.

I’ve always felt there was an obvious reset with the 1986 Joe line. You start getting a lot of  repeating specialties, but they’re done in a fairly blunt manner. There’s one Marine with a hat and moustache replacing the earlier one, there’s a new SEAL in scuba gear replacing the earlier one. It’s almost as though there were certain thresholds that needed to be hit. While the replacements are the easiest thing to spot, the packaging was updated, the colour choices were changed, and now there’s almost a new generation to the Joe line. It makes sense in a way, as if the average Joe fan was 8 to 10, there’s a reasonable expectation they’ll be interested in it for about 2 years*, so if you were to break the stylistic choices into 2 year blocks, it works out pretty well. 1982-1984 is pretty cohesive, as are 1986-1988. 1985 is an interesting year, as it’s pretty easily integrated with either of those timeframes. It works suitably as a buffer year. 1989 is very similar, as there’s immediate changes in the 1990 run, in the way the line is presented and it’s almost as stark as the differences between 1984 and 1986.

*That’s just my conjecture, based on graph paper demographic analysis, which wouldn’t take into account the quality of both the toys and it’s accompanying media, which did a lot to keep Joe fans integrated for years.

Despite his mold’s shortcomings, Beachhead the paint job on it is really good. The green is definitely a different shade than we’re used to seeing, but it still looks good, and is unique enough that he stands out. The detailing is nice as the grey provides colour, but isn’t overly eye-catching, the way the red shoulder pauldrons on Lowlight, Roadblock and Cross Country tended to be. His pants have a really decent camouflage pattern on them, which were much better than the rest of 1986’s attempts at camo, as it falls more in line with the earlier releases. 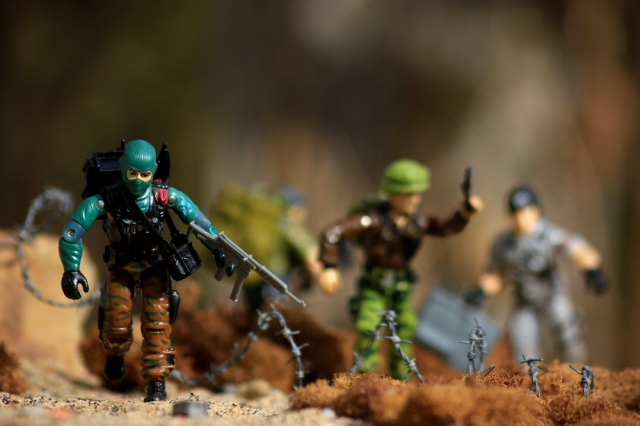 The accessories Beach Head received were pretty good, they’re better scaled to the figure than a lot of the overly large guns that started to be included. Plus the ammo purse shows that there’d been some great strides in accessory sculpting since 1982’s Snake Eyes purse. Honestly the purse is my favourite of all Beach Head’s accessories. His backpack is both good and bad. On one hand, it’s well detailed, doesn’t stick out too far, yet is still large. The problem with it, though, is that it looks like a square with things attached to it, it doesn’t appear to be a functional bag of any sorts. I once read and saw an explanation as to what exactly the equipment on the side of it was, but that was probably 15 years ago and I’ve long since forgotten what it was!

The character described in the filecard is neat, though the stuff about getting up and running 10 miles before breakfast would progressively become more overused and clichéd. It’s funny how the cartoon made him very short tempered, while the filecard is the exact opposite. Also turns out that Beach Head was advising people on how to charbroil nuns.

At the end of the day, Beach Head is a popular character, and this figure, is good enough depiction of the character. It could be better, but even with it’s warts, it’s one of the strongest figures from his release year, and he holds up pretty well against a good chunk of the 1987 line, as well. Just based on his design alone, Beach Head likely would’ve been the highlight of the line if he’d been a little more in line with the 1985 stylings.

This entry was posted in Reviews and tagged 1986, Beach Head, G.I. Joe, Ranger. Bookmark the permalink.