Twenty years have gone by since G.I. Joe figures, released as the “A Real American Hero Collection” were released. These figures have gone through various levels of appreciation by collectors, from the early days where they were heralded as G.I. Joe being “back in a big way”, to lambasted for the bland and uninspired colouring and figure choices, to the current day’s general apathy. Overall they were some figures that happened, with a few stand out figures, the entire series is pretty much an odd footnote that is either nostalgic reminiscing of the days when there was a vibrant online G.I. Joe community, or is entirely passed over by collectors who weren’t there.

In a way it’s kind of strange to think this Snake Eyes is older than the 1982 Snake Eyes was, when this figure was originally released. This figure is the 1989 Snake Eyes mold, which I don’t think anyone would ever claim to be the best depiction of the character. Honestly, of the 5 Snake Eyes sculpts in the 12 year vintage run, this is probably the worst Snake Eyes there is. I mean, structurally the Ninja Force Snake Eyes, is a worse action figure, but that design is a hell of a lot better. Either way, the 1989 sculpt was a bold choice, but understandable now, considering that the 1997 releases included 2 uses of the ’83 figure, and the 1985 figure was MIA. The ARAHC was definitely more of a line with a low-cost use of existing assets objective, though they got stupid and made some really ugly pale white guy heads, instead of maybe doing something like re-sculpting a portions of the 85 mold.

The actual figure itself isn’t great, as there’s oddities to the sculpt that can be quite distracting. The giant knives look cool, but aren’t painted, and wind up being comically oversized when you start to scale them to the rest of the body. There’s some other things that can be kind of distracting as well, since it’s really a symmetrical, he’s got one ear thingy, the bicep grenades aren’t the same, kind of things like that. Though looking at the full-picture, it’s a sculpt that resonates as Snake Eyes, and is actually a decent idea to modernize the original commando outfit. Wasn’t executed perfectly, but that’s just Snake Eyes’ lot in life!

Colouring on this version is interesting, as he’s not black, which if you didn’t have the figure in hand, you might not realize, based on the fact that almost all of the online content of this figure features 20 year old images or scans. He’s a slightly lighter shade of charcoal than the 1982 weapons, which is a neat choice for a figure, and separates him from the 1989 version. All of his painted details are a metallic blue, which was a colour that had become part of the Snake Eyes pantheon in the 90s and lasted for a portion of the 2000s as well.  This figure has a GI JOE logo tampograph on his left leg. It’s an incredibly stupid, tacky and ugly waste of resources that made what could be a middling  Snake Eyes figure almost unusable. I think there was rationalization at one point that this was supposed to teach kids that Snake Eyes was a good guy, but I tend to believe that children really aren’t that stupid. 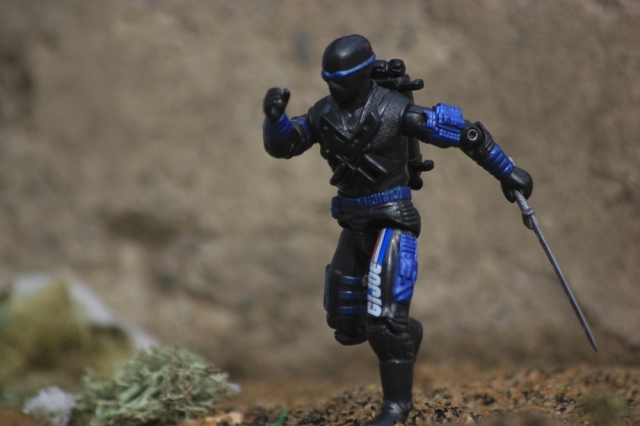 The 2000 figures were pretty good for coming with the accessories that originally came with the mold. Sometimes there were some oddities, or omissions, but they were pretty good for the most part. This Snake Eyes includes the majority of the 1989 Snake Eyes accessories, the Uzi, the backpack, the sword and the three-piece staff. Honestly I was always disappointed that they included the staff, rather than the blowgun thingy. Partially because the staff, while an impressive feat of toy engineering, it sucks to actually try and use, and the blowgun is something I find absolutely hilarious. You’ve got a mute commando who ALWAYS wears a mask, using a blowgun? Homeboy’s going to have to lift his mask up to use it! Because I think it’s funny, is a good reason that Hasbro should’ve included an accessory.

This figure is like a lot of the A Real American Hero Collection, pretty good until you inspect it closely. Knowing now that it was not much but a placeholder use of the brand, rather than the beginning of bigger and better things for G.I. Joe, we thought it was going to be all those years ago, a figure like this is both a slight disappointment, and a reminder of what potential we thought G.I. Joe could have. I don’t think the ARAHC line was perfect, but I’d be a liar if I didn’t say that I kind of miss those generic blue and orange 2-packs, that if there’d been someone with a better understanding of G.I. Joe could’ve been some tremendous figures.

This entry was posted in Reviews and tagged 2000, ARAHC, G.I. Joe, Snake Eyes. Bookmark the permalink.