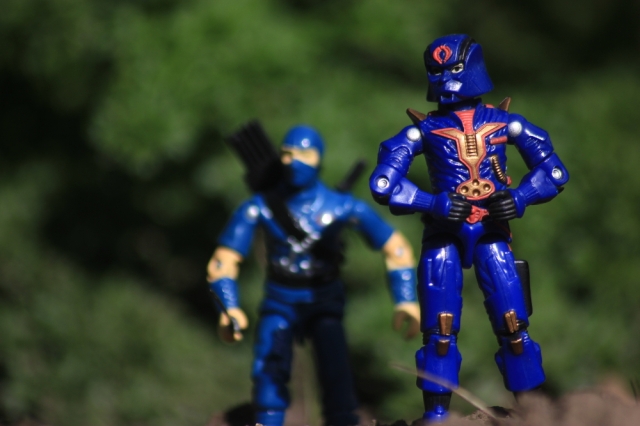 The 1983 COBRA Commander mold is a classic. It’s a well done sculpt with enough trappings to it, that the supreme leader of COBRA Command doesn’t look like a chump, but it also is utilitarian enough that it could’ve been used for non-COBRA Commander figures without detracting from COBRA Commander. So the fact the mold wasn’t used on the 1997 figure, like the original prototypes had shown, is a real disappointment.

The 1987 Battle Armor COBRA Commander mold is a dynamic new take on the character, probably too much so, as in the comic book, and also most fans, it usually represents the idea of Fred VII, the Crimson Guard who became COBRA Commander’s imposter. It’s not really a bad figure, but it’s unfortunately not all that compatible with the majority of COBRA High Command figures that aren’t dressed up like some form of Animal, or S&M Strongman. However that’s just a fact of life of being a figure in a toyline that went on for 12 years.

I don’t know why the mold choices were changed, as the 1983 CC mold had been in Hasbro’s possession since day 1, and never actually stopped being produced, considering you could get the Hooded Cobra Commander for 10 years. The majority of the 1997 figures had just prior been the bulk of the Funskool G.I. Joe line, so maybe the 1987 Cobra Commander, which had also been a part of that was just an easier mold to use. We can’t accuse Hasbro/Kenner of never being lazy. However, despite the mold change, an actually interesting take on the mold was created!

From the colours used on this figure, being compared to the prototype, it looks like they just took the proposed scheme, and placed it on the new sculpt, with a few changes to match details on the 1987 figure. Considering how different from the original figure that is, I think it’s pretty cool they did that, especially for a 1997 release, where a lot of the colouring is interesting, but I wouldn’t say they took too many legitimate risks. To me a lot of 1997 figures look like they were designed by people who had an understanding of both stereotypical Military colouring, classic G.I. Joe design tropes, and an inability to dress themselves in real life.

I must say, that had the classic molds been found for the figures, it would’ve been nice to see the 1997 CC retain these colours, it would’ve also been really cool to see the 1983 Destro in the 1997 Destro scheme! Now that’s a Factory Custom someone needs to make!

There’s a charm to the 1997 figures, as they’re in a way the first “grown up” take on G.I. Joe A Real American Hero toys. There’s some very cringeworthy figures or aspects of figures and some were far too clever for their own good. However they were taken seriously, and there was an earnest attempt to provide refreshed takes on classic figures, without separating them too much from the 1980s figures. if you look at them, they’re done up in away that they’re almost joyless. The figures are all dark, there aren’t any cutesy nods with them, it’s all real serious. I think that provides a semi-endearing quality to the figures as with the well known fan participation in the line you can tell a lot of these designs were done with “doing GI Joe the right way” in mind. In a way that makes the missing molds and such kind of funny because it unravelled what people were trying to accomplish, and provided a couple of interesting and as close to a “fun” figure the 1997  line actually had. Basically the 1997 Joes were the teenager that took themselves too seriously, without realizing how ridiculous the whole thing was, timeframe of the Real American Hero.

This COBRA Commander mold, has some very nice details, with enough ambiguity to the purpose, was it to prevent people from knowing he was a Reptilian? Or was it to hide a mechanic impersonating the big bad. While I had previously stated that the 1987 Sculpt, isn’t a great fit for the more classic design takes on COBRA High Command figures, that came either pre- or post the figure’s original release, this 1997 version, with it’s deep blues is a better fit with classic 82-86 era COBRAs. It’s amazing what a change of colour palette can do. The figure itself is not actually in the classic COBRA Blue, but it’s closer than some other attempts over the years.

Is this a great COBRA Commander? No, it’s probably not even really a good one, but it’s unique, especially for a mold that had 3 almost identical ideas being portrayed by it. So while I’m not sure if this is a figure I’d say is better than the 1987 figure, it’s definitely the best use of it otherwise, and probably my favourite use of the mold. 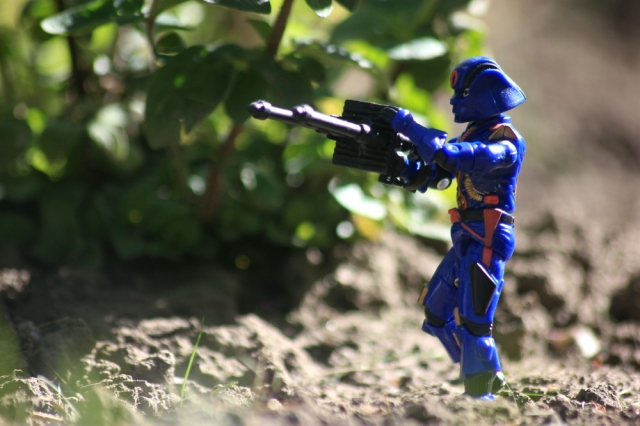 This entry was posted in Reviews and tagged 1997, Cobra, Cobra Commander. Bookmark the permalink.