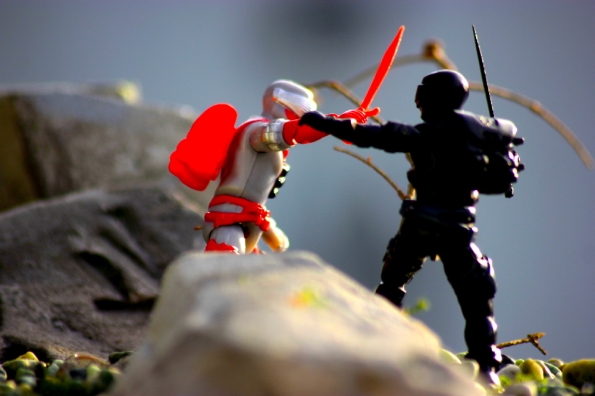 Unique foreign concepts have been one of the most drawn upon wells since the early 2000s. It makes sense, they’re already in existence, usually the ones chosen are going to fit into the American G.I. Joe fairly seemlessly, and they usually come about from figures or molds that weren’t overexposed (likely because they were in South America or India).

The Black Major’s newest figure is the 1985 Snake Eyes mold. I’ve spoken my opinion of the mold, before, I feel that it’s somewhat “off”, and it doesn’t matter if it’s black, purple, grey or red, I still feel the same. Though when not hidden in darkness, the details come out, and some of them aren’t really that glamorous. He’s got visible lips, and he’s wearing a pair of dress shoes. Ladies and gentlemen, America’s Greatest Conversationalist.

One of the expected repaints was to be done up as the Argentinian figure and character, the COBRA Mortal. Grey red, and black all go together quite well. It’s a striking design, that looks better when not done up like a disco ball. There’s a few cool details like the red dot on his head, and his Visor is done in a nice silver. Overall it’s a very cool take on the 1985 mold. The fact the left leg, elbow joints and right lower arm are all painted red takes a bit away, but it’s an understandable cost cutting decision. (Watch those elbow joints for flaking). The red part of the face is a really crisp paint app, which shows that the quality is there!

The Black Major 85 Invasor/Mortals include the entire gamut of the Snake Eyes accessories. Instead of just doing black ones, a multitude of colours were used, this is somewhat a double edged sword, as there’s cool green ones that fit in well with 1985 era accessories, there’s also ones like the Mortal’s which are day-glow red. It’s nice to see some colour co-ordination, but it’s kind of the worst aspects of Battle Corps making a return. Even Timber tends to be unique with each version, the one included with the Mortal has a big red streak on his back, I’ve never been a fan of Timber so it’s whatever to me, but it’s nice that he’s here, and is unique amongst the figures.

As a character, the Mortal is viewed as less a human being, and more a soul-less robot due to the cruel and calculating nature of the man. I like this as it’s shown he doesn’t mess around, but isn’t some schemer with ulterior motives. The way the Mortal works into my universe, is as the Red Shadows had collapsed, and what was left of that army had been scattered to the four winds, COBRA Command scooped up as many as they could, as experienced warriors are never a bad thing to have. The COBRA Mortal was one of the most prominent Shads to join up, and based on his background and abilities was given a little more leeway. This gave COBRA a fairly intimidating and useful field agent, early on. Though at the end of the day, likely wasn’t a match for the new Anti-Terrorist Strike Team, or the newer sharks swimming into the waters of COBRA Command. 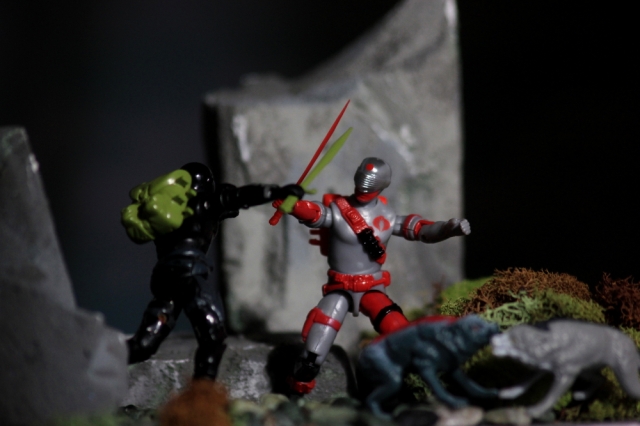